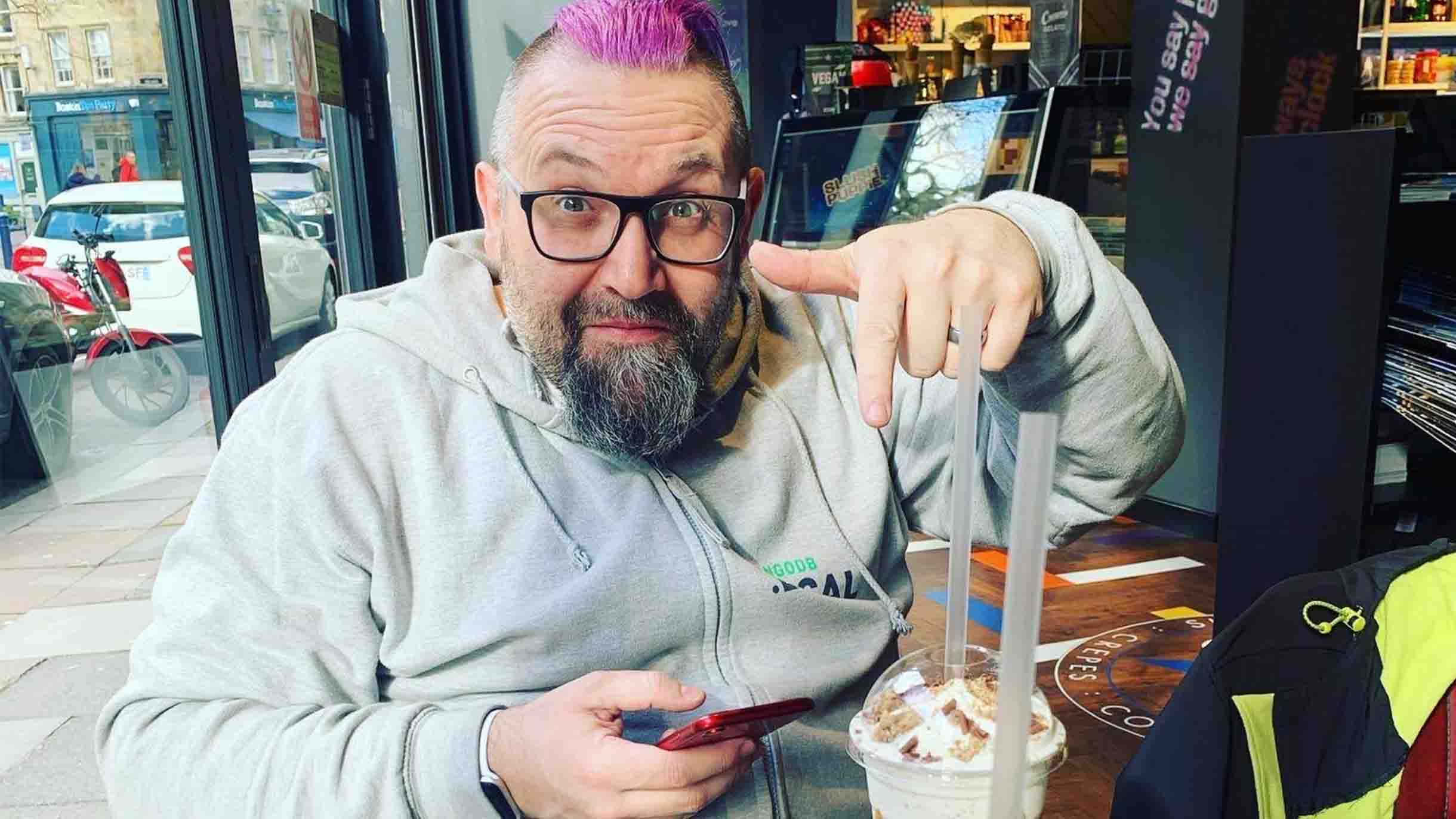 So far, we’ve taken you on a trip from Barcelona to Bath, via Norway with Anna, and we’ve been on a musical odyssey spanning karaoke and lo-fi house with Annabel.

Next up in our team meet and greets, we talk shoe shops, 3D printing and Warren G with our one-of-a-kind server-side lead, Rhymes Toasterface…

And before you ask – yep, that is his name. Well, actually his full name is Rhyme-Master Joey Joe Joe Toasterface. Really.

So Rhymes, where did your journey to server-side maestro begin?

I’m a serial career changer. Or at least I was before I joined Seccl in February of 2017. I’ve been an office manager (the general all-round person that does the things that need doing), worked for the NHS in child health, for property maintenance firms, in finance departments and even as a recruitment consultant for five years.

But none of that scratched the itch, so I enrolled on a four-month software development bootcamp at Mayden Academy – and that eventually led me to where I am today.

And what, in layman’s terms, do you do at Seccl?

I was asked exactly this question by a friend of mine after a few beers, and he had no clue what I was talking about.

And not just because of the ‘few beers’, either. So, I actually wrote a blog to try and clear it up.

But in general, I fix broken things. By that I mean I help write code and create software that makes the whole system run.

Someone will typically come to me and my team with their requirements – for example ‘I want to be able to pay X into Y account’ – and we make it happen.

How would you describe what Seccl is all about?

For people who don’t have £100k lying around, financial advisers don’t usually get involved as it’s not worth their while. Our technology hopes to make it more viable for businesses like theirs to serve the widest range of people, by making them more efficient – so that no-one has to go without help.

You’ve had exposure to plenty of companies. What made you want to join Seccl?

To be honest, I didn’t know I wanted to join Seccl in the beginning. Let me go back to my pre-Seccl days to explain.

After graduating from Mayden Academy, I landed interviews with some terrible people (if you’re reading this, you know who you are…).

For example, one company pre-interviewed me by phone before inviting me in for a face-to-face chat – but no test, they said. Then I arrive only to be handed a technical test with questions on topics they knew full well I had no experience of. I think that because I was close to 40 and changing careers, they thought I was someone to take advantage of. They even sat on their phone the whole time.

Then someone put me in touch with Dave (co-head of Seccl). I had a smalI portfolio site to house my Academy coursework, but I didn’t have a huge amount of ‘real’ stuff to point to. But I did have a website for a kids’ shoe shop in Bristol that I built for a friend, so I just gave Dave a link to the GitHub repo.

When I met him he was sitting in a tiny meeting room in a co-working space in Bath. We had a chat, not an interview. It wasn’t like the others – Dave’s a normal guy. The conversation felt comfortable and candid, and we just clicked. It was so refreshing.

Then I met with Rebecca for all the official HR stuff. I was told not to worry about how to dress, and we just had a casual meeting in reception as our meeting room was occupied. Again, there was no pretence. It all just felt so ‘human’, and made sense. And it’s still the same to this day.

What does success ‘looks like’, both for you and for the company?

Personally, getting through the day without breaking more things than I’ve fixed is a huge win.

But when it comes to Seccl, I think in many ways we’ve achieved a lot of success already. We came from nothing and nobody, really. There were just three of us when I joined, there was no live product, no FCA permissions, no office – nothing.

It’s easy to take a biased view of something that you feel is ‘yours’, but the acquisition by Octopus gave some real external validation, and was a huge milestone.

They gave us a real grilling. We spent six hours with some heavy-hitting software due diligence guys from Holland, and they walked away happy with what we do. In that regard, I think we’ve succeeded where some (most) startups fail – in getting past the ‘idea’ stage.

I genuinely believe we’ll be one of the biggest platform providers in the world. Maybe not tomorrow, but within this decade for sure. And it’s a great place to work. That’s key to our success, too.

There’ll no doubt be a few – but what are your top three highlights from working here over the years?

One is a little selfish, I suppose. But when I joined I had no commercial coding experience and had to learn on the fly. Now what I made is out there and working. That’s amazing to me.

Also, a couple of years ago our baby was due in the summer but was really, really early, requiring a few weeks in hospital. I took my laptop to the hospital to start working in the canteen, but Dave and Rebecca said to drop everything and come back when I felt ready. I took a month off, and they weren’t bothered. That made it clear to me that this company really cares about people.

More recently, the company karaoke we all took part in at Christmas was a blast. I’ll sing pretty much anything once I’ve had a beer, but the highlight (for me, at least…) was my duet with Ronak. We performed Regulate by Warren G and Nate Dogg. And once a few more shots started coming in, everyone got involved.

You’ve made a pretty good case already, but what would you say to someone umming and ahhing about whether to join Seccl?

Well, what I tell all the engineers I interview (and we’ve been interviewing a lot since lockdown) is simple: the fact I’m still here is all the evidence you need. Software devs tend to move around quite a bit, but I couldn’t be happier. Seccl is for you if you want the freedom to work in the way that you prefer.

Likewise, you’ll be supported to go and learn stuff, not least by using the Udemy platform that the company has invested in. And this comes from the top, as even Sam (co-head) encourages everyone to spend at least 10% of the working week learning and experimenting.

But it’s not perfect – if I could change one thing I’d like more snacks. Delivered to your home!

Speaking of lockdown – it’s easing, but a long way from ‘normal’. How have you found it?

Everyone has struggled a bit. And that’s ok. I hate all these ‘motivational’ posts about how everyone should use this time to become the best version of themselves. Just getting by is a big win.

For me, the transition to home work hasn’t been too bad, as I worked from home three days a week when I first started at Seccl (as we didn’t have enough desks in the co-working space!). But I’ve got more kids now though…

In the hour a day I’ve got back from commuting, I’ve been tinkering quite a bit – I started 3D printing in the first week, making a tug boat, loads of boxes, a slingshot for the kids, and even a Pikachu.

Now for the quick-fire round. Who’s the funniest team member?

Peter Kanev. Without a doubt. He’s just freaking hilarious. Really dry and tells loads of stories of growing up in Bulgaria that make it seem other-worldly.

Who would be the most useful on a desert island?

I reckon Sam HJ would be resourceful. I don’t know why, he just has that vibe.

And who would throw the best house party (socially distanced or otherwise)?

That’d be a close call between Ron and Stu, but I think Ron just edges it. Stu would do a good one, but more canapes and cocktails, whereas Ron’s would be an absolute throwdown.

If you’d like Rhymes as a colleague (and who wouldn’t?!), we’d love to hear from you. Check out our careers page to see our open roles. And don’t worry if none of them look totally right. Just get in touch with Rebecca at people@seccl.tech – and start the conversation!